It feels like it’s been forever and a day since I last stepped foot in the Museum of Fine Arts (in reality, I think it’s only been about a year. It just feels much longer!) but every once in a while they have a new exhibit or a special event/function that I can’t miss. Recently, there were two exhibits- both on display through February 23rd- that had caught my attention. This past weekend I made it a point to take a couple of hours while I was in the city to finally check them out before it was too late- and it was definitely worth the drive.

The first exhibit was to showcase Jackson Pollock’s “Mural” (1943)– which is his largest completed canvas, having taken up nearly one entire side of the gallery wall- and originally commissioned by Peggy Guggenheim for her Manhattan townhouse.

The other, a series of rooms as opposed to just the one open space- was to highlight the colorful and macabre work of one of my favorite artists- Hyman Bloom. It was fascinating and really, really great to be able to see everything up close and without crowds in the early morning hours after the museum first opened- and I honestly could have stayed there for much longer if I didn’t have other errands/plans I had to attend to. 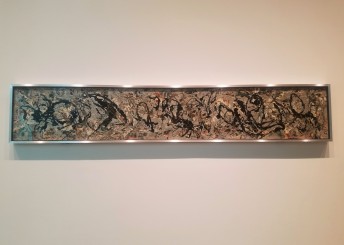 The MFA is a really beautiful building to spend time in, and it’s always changing/evolving and expanding. I’m excited for the reopening of their Greek and Roman art/sculpture collection- presently under construction- since I had really enjoyed it the last time I stopped by the museum. And in April the MFA is unveiling a new Monet exhibit that I’m sure is going to be impressive and informative.

And even though I cannot paint to save my life (which means I’d probably have a stellar and lucrative career in modern art,) every time I visit the galleries I want to run home, pick up a paintbrush and just start going crazy on canvas. It’s so inspiring.