To get to New Boston, New Hampshire (a real place!) from where I live takes just under two hours if you’re traveling the back roads as I so often do- and although that may seem daunting to some- the view is worth the mileage. Winding around mountains, over rivers and streams, past sweeping farms and quaint little towns/villages and shops along the way- it’s a drive best reserved for peak foliage time here in New England.

It’s also a drive I made earlier this week. While part of my trip was indeed to marvel at the Autumnal landscapes on a beautiful, crisp sunny day- my destination is also home to an unusual grave marker I had wanted to see in person while paying respects to the young victim it commemorates.

As a woman, I have plenty of unwanted harassment stories from over the years- ranging anywhere from my early teens until now. I’ve been lucky that the men who have singled me out/targeted me and attempted to hook up with me for the most part have given up and gone away when I’ve politely declined (emphasis on politely) or, at the worst- had to lie and say I was taken/engaged/married to finally get them to back off- but I’ve heard horror stories about other women who weren’t as fortunate when turning down a guy’s advances.

And before anyone gets offended- I know not *all* men are like that- but I’m specifically talking about the ones that are. If you find yourself getting upset over this- then you really need to sit back and reevaluate yourself and your behavior to figure out why that is.

I digress. Rejection escalating into murder unfortunately isn’t an uncommon occurrence- and New Boston saw that all the way back in 1854 when Sevilla Jones, a 17 year old- was shot to death by a dejected would-be suitor by the name of Henry Sargent while she was walking to school with her younger brother.

The details of the relationship between Sevilla and Henry vary. Some say Sevilla had initially shown interest, only to fall in love with someone else. Others say that Sevilla’s mother had disapproved of Henry and squashed any potential romance from the start. Still others say that while Sevilla may have liked Henry at first- his controlling behavior and non-stop harassment was so off-putting that she eventually ceased contact all together.

Whatever the circumstances that led to their relationship/possible relationship souring- Henry wasn’t going to simply brush himself off and move on- and instead he wrote a long-winded suicide note blaming everyone but himself for what was about to happen.

On the morning of January 13th, 1854- Henry approached Sevilla and her younger brother while on their way to the local schoolhouse and shot Sevilla four times before turning the gun on himself. While Sevilla died instantly, Henry did not- however upon learning what had happened, it’s said the local Doctor was so disgusted with Henry’s actions that he refused to treat him- and he eventually succumbed to his injury hours later. 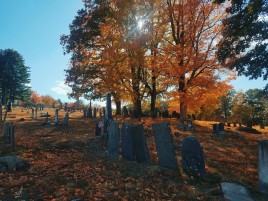 The narrative provided by the press who covered the story painted Henry as some sort of lovelorn savior, willing to take himself and his “beloved” to the afterlife together and printing his suicide letter in it’s entirety to romanticize his obsession rather than calling him out on being a murderer- but it was ultimately Sevilla’s mother who got the final say as to how her daughter’s tragic end was told.

Not content with simply sitting back and letting the man who killed her daughter become a victim himself- it’s said that Sevilla’s mother had the headstone for her child inscribed specifically to call out Henry for what he was and detail what he had done.

The headstone for Sevilla, located just a few yards behind a white building in the cemetery- names Henry as her killer- with a small engraving near the bottom that reads:

“Thus fell this lovely blooming daughter, by the revengeful hand, a malicious Henry, when on her way to school, he met her and with a six self-cocked pistol, shot her.”

I left a flower for Sevilla while I was visiting. Henry’s grave isn’t far from hers (New Boston wasn’t a big town back then, after all-) but I didn’t bother finding his. He doesn’t deserve a visitor in what is a very quiet, very lonely-feeling graveyard.