While I’ve been getting by with non-essential businesses remaining closed during the ongoing COVID-19 situation (I’ve accepted my current no-hair-styling, no-professional-manicure way of life)– it’s been interesting to see how different essential businesses are operating these days. I don’t just mean in grocery stores, which have implemented directed floor layouts and checkout procedures to adhere with social distancing protocols- but even with things as basic as car maintenance and upkeep.

A little later on today I’m scheduled to have my routine oil change and some repairs done on one of my tires- and the time that goes into pre-service disinfecting, a complete wipe-down of the car before it’s returned to me, etc. has made something that would typically take a half hour to 45 minutes run as long as an hour and a half. It’s a wild “new” normal that I’m still adjusting to- although I completely understand why it has to be done.

Earlier this week, pre-tire issues- I took a drive to get some fresh air and visit an unusual and easy-to-miss spot in Brookfield. Spooner Well, or the marker where the well used to be- was the site of a grizzly and poorly planned crime in 1778. 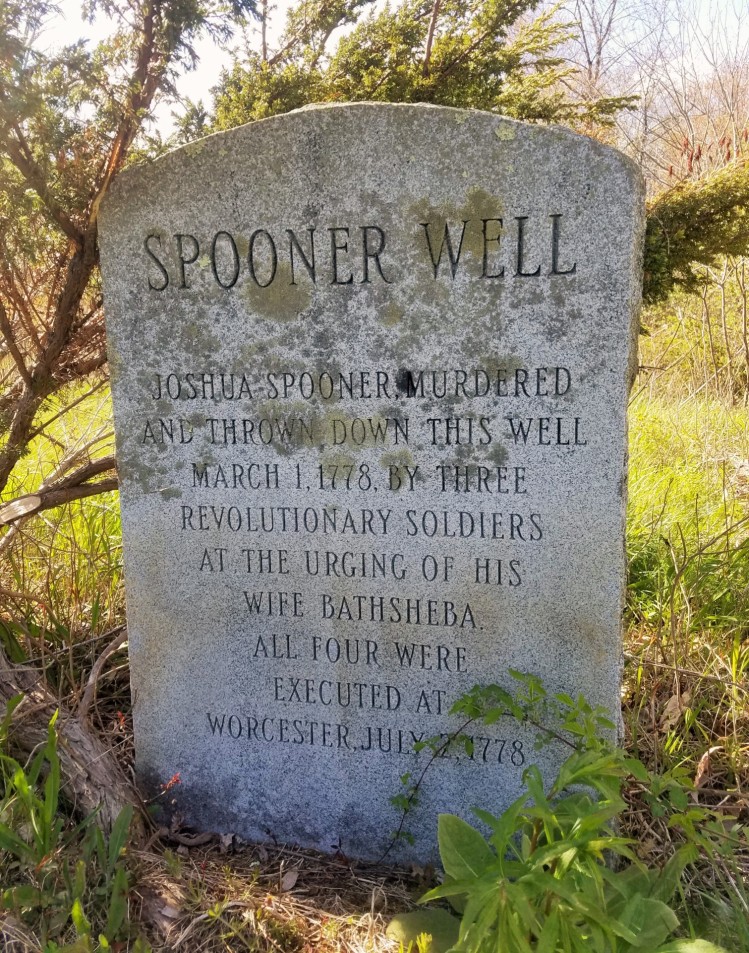 Bathsheba Spooner, fed up with her reportedly abusive farmer husband, Joshua Spooner- had him beaten to death by her secret lover and two runaway British soldiers she had aided and housed- and his body was tossed into the well on their property. Everyone involved in the crime was apprehended within 24 hours- and the four were tried, convicted and hanged together later that Summer- even though Bathsheba was considerably far along in a pregnancy with her lover’s child.

Her death marked the first female execution in the United States since the Declaration of Independence- which is a pretty big deal.

And since we love commemorating gruesome crimes and strange occurrences here in New England- the spot where the well once stood is marked with an old stone a little ways off the roadside. It’s easy to miss amid the bushes and trees- but it’s there if you look for it- which I certainly did. This find wasn’t so much a “Local Love” as much as it was a “This Actually Exists.”

Is it any wonder nearly every ghost/paranormal horror movie takes place in or around Massachusetts?