I’ve never been to Rhinebeck, New York before. To tell you the truth, I had no idea it even existed (and I love a good, “straight out of a fairy tale” small town!) until my sister-in-law shared photos from a day trip she’d taken with my brother and my niece a couple of months ago when they needed a break from quarantine and just had to get away for a few hours for some fresh air and a change of scenery. She’d been familiar with the picturesque location- and, specifically- a beloved and famous candy shop there she had wanted to visit.

When I saw her pictures, and my brother explained the story behind Samuel’s Sweet Shop– I knew I had to see it for myself because it looked so cute and charming.

Opened in 1994 by Ira Gutner, and named after his Uncle- Samuel’s quickly became a gem in the heart of Rhinebeck with it’s classic candy selections and coffee offerings. When Ira passed away in 2014, however- the shop faced potential closure. That was until a few of Ira’s famous friends and neighbors pitched in to save the shop and keep it open for locals and tourists alike.

Actors and Samuel’s regulars Paul Rudd, Jeffrey Dean Morgan and Hilarie Burton bought the shop (and are known to pop in from time to time!) and made sure it continued offering delicious specialty candies and caffeine concoctions.

Given that Rhinebeck is only a couple of hours away from me, I opted to make the scenic trip earlier this week to partake in some hot chocolate and yogurt-covered pretzels- and I was not disappointed. Everything tasted amazing! 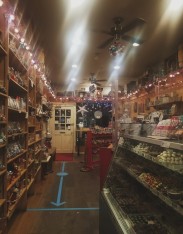 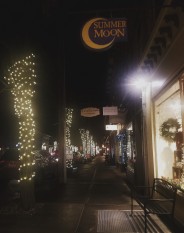 Samuel’s is adorable, cozy, beautifully decorated, has an incredible selection of candy, snacks, drinks and gifts- and the staff was so unbelievably friendly and helpful!

Also, Rhinebeck might be one of the prettiest places I’ve ever been and I have a feeling I’ll be visiting more of it’s shops and (when safe to do so)– it’s restaurants and attractions in the near future. It started snowing while I was there- and I swear it was like something out of a movie. I was in complete awe and took some time to just walk/look around for a while before I headed home.

And although Paul Rudd wasn’t there while I was- there’s always next time! Here’s hoping!