Continuing with my Tour de Spooky in and around New England in preparation for Halloween, I recently stopped in the small town of Pembroke, New Hampshire to visit one of the most unusual and unexpectedly grisly monuments erected to commemorate the victim of a serial killer- and which sits directly across the street from the town’s combination middle and Jr. High school- perhaps as a cautionary tale to the students?

In October of 1875, 17 year old Josie Langmaid was on her way to the nearby Pembroke Academy when she was abducted and murdered by Joseph Lapage- a woodcutter who was later determined to be the serial killer dubbed “The French Monster” after being linked to a string of attacks and murders in Canada and New England.

Before Lapage was eventually captured and confessed to Josie’s murder (among his other crimes)– after which he was subsequently tried and hanged three years later in 1878- the people of Pembroke had discovered Josie’s body and gave her a proper burial. In true 1800s fashion, however- the crime scene was also commemorated- with a 15-foot tall monument with etchings on three of the four sides. On the front, facing the road- is an etching detailing Josie’s date of disappearance/murder. On another side is a quote from Romeo & Juliet- and on another side of the monument are specific coordinates.

You see, Josie was not just murdered quickly and quietly. She was beheaded- and the people of Pembroke decide to mark the areas of the scene where her body AND her head were found. 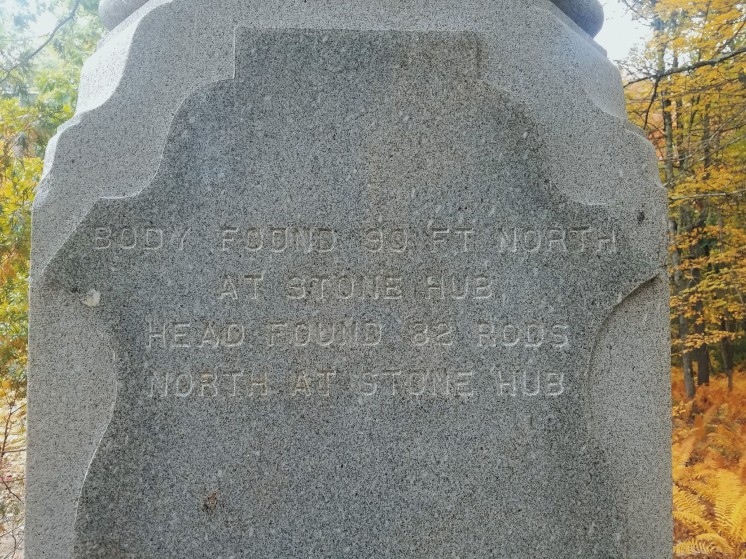 Josie’s monument is just another example of the unusual and macabre tributes and markings around New England that we often pass on a daily basis without really giving it a second glance or thought- which makes me want to find even more things around where I live and where I grew up to learn about.

Do It For The 'Gram