When driving, it takes approximately five hours to get from Las Vegas, Nevada to San Diego, California- and it’s a drive I’ve made multiple times to and from with Kelsey over the years. Whether it was to visit her family, catch a show, have some much needed “girl time” with our playlists and iced coffees- I always enjoyed the trip. The desert can be a very beautiful and very interesting place- with mountains and plenty of roadside oddities (and yes, some creepy places, too- which is right up my alley) to see.

This past Wednesday, after spending a few wonderful and scorching hot days in Las Vegas- Andrew and I packed up our respective vehicles with supplies and with him- the kids- to make the drive and meet up in San Diego. Although I would have loved to travel with them, there were a couple of places I needed to stop along the way- and stopping repeatedly in 100+ degree temperatures with two babies in tow didn’t seem like the best idea. I opted to make the trip solo, my first time doing so since Kelsey and I had first started making the drive together many years ago.

My first destination was Seven Magic Mountains, an art installation on the outskirts of Vegas that I had last visited with Kelsey and where we had an impromptu photo shoot (the outtakes remain some of my favorite pictures of us together.) It just felt like the thing to do- since my entire trip was centered around honoring her, mourning her, celebrating her and being with her family. 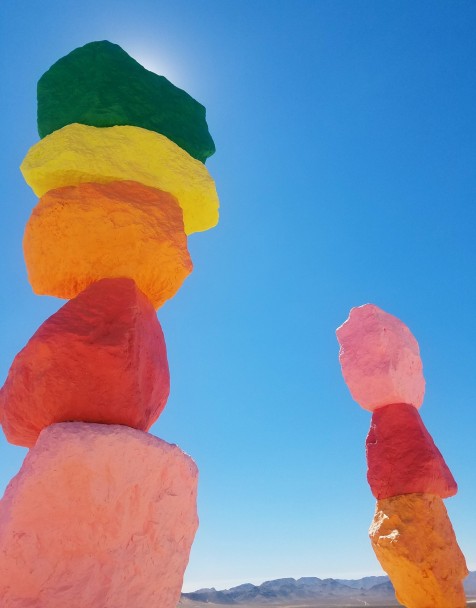 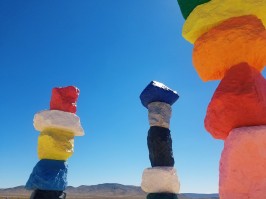 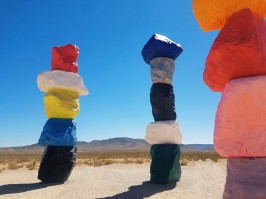 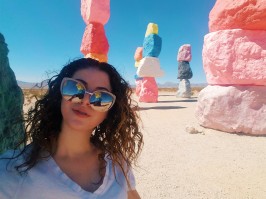 There were only a few other people there at the time, and everyone was either wearing a mask or actively practicing social distancing. I only removed my mask once to snap a selfie in one of the rare instances where nobody was standing behind me in my shot- but it went right back on given that it was awfully windy that morning. I ended up with sand all over me by the time I’d gotten back in my car.

But it was great to be back.

After Seven Magic Mountains, I was back on the road and heading further West into Baker, California where- at the request of family members back home- I stopped to pick up souvenirs at Alien Fresh Jerky– a novelty store that caters to meat-eaters and UFO conspiracy theorists alike (Area 51 isn’t that far away, after all.) I stocked up on some goods- and some water- before I snapped some photos of the shop. It’s pretty great, really.

And, directly across the street is the World’s Tallest Thermometer– visible from the roadway for a considerable amount of time. Although you can’t see it from the photo I took from directly beneath it- it was well into the nineties despite it still being fairly early in the morning at the time. 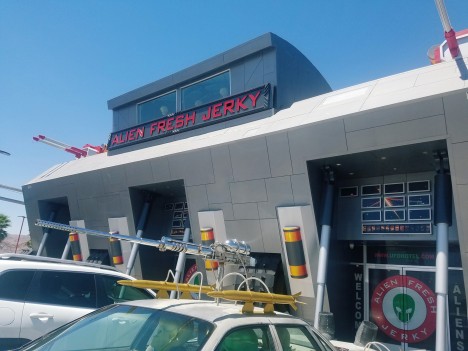 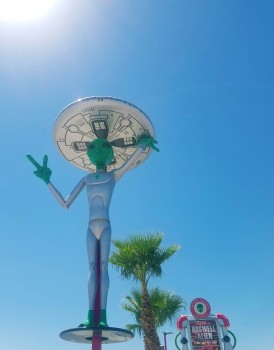 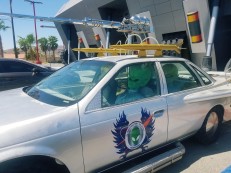 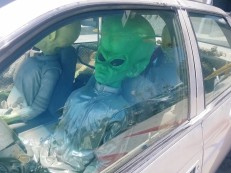 Baker is an unusual place, because it’s a town that doesn’t really feel like a town. There’s houses and a church and schools and everything- but the main focus of the town is a strip of road that has the UFO shop, the thermometer, and a handful of drive-thru/take-out places for travelers that are passing through while en route to other destinations and who need to stop and eat or stretch their legs.

It’s not quite “Wild West” level- but it’s very close!

After leaving Baker, I was on the road again- and this time I didn’t stop until I needed gas and to partake in my annual feasting of Jack-In-The-Box (I love it so, so much- and I’m forever bitter it’s not an East Coast thing.) before I finally reached San Diego- a little tired, a little dehydrated- and still covered in sand.

I’ll have my photos and recap of the last few days of my vacation, spent in Southern California- up later on this week. There’s a LOT of pictures I’m looking through!

Do It For The 'Gram

Happy Friday!.
Chilling at the Vanderbilts'. Shorts by @dearjohndenim. Shoes by @sperry. Jacket by Market & Spruce. 📷 by @dan_little.
💌.
Cheers to a stellar weekend. 🍹👙 [📷@dan_little].
My morning plans got rained out, but the sun came out in time for me to pick some berries. 🍓.
Happy Friday!
Loading Comments...
Comment
×
%d bloggers like this: